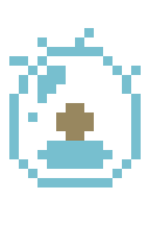 This animate sac of luminous ooze rolls along the floor, unknowingly guiding those spry adventurers who would ply the halls of Bethesda Susa.

blue jells are oozes that primarily belong to the grazing hedonists faction, making them by default neutral to the player character instead of hostile like the oozes faction. It has a light radius of 6 due to its luminescence. They are primarily found within

Bethesda Susa, but can spawn elsewhere.

On death, blue jells explode into a puddle of

convalessence with an 80% chance of the liquid spawning on each adjecent tile. It also bleeds convalessence.