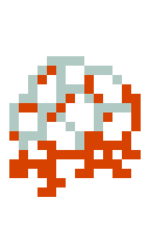 Their leafy lobes flush and dampen with liquid.

A giant cider weep is a type of weep, stationary fungi found in Caves of Qud which appear with a pool of liquid around them.

cider distributed in a 5x5 area around the weep. Their counterparts,

cider weeps, instead appear in a 3x3 pool containing a total of 27-56 drams.

Like all weeps, giant cider weeps can be found randomly throughout the world, and their locations will be marked in the player’s journal. Giant weeps can be more commonly found in the