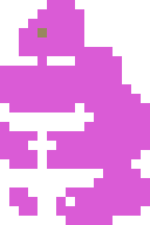 You stand not at the foot of a wintry knoll but beneath a mountain of muscle, swathed in blanched fur, that must be nature's crowning jewel. Cast from the mold of the great apes (or perhaps the exemplar from which those apes were molded), the living god differs only in that He bears not two but six arms, each of which might be the fleeced bole of an ancient yew. His fists are of proportions that suggest the might with which hoary gods beat the mountains into shape when the earth was young. However, His aspect bears not a shred of that divine fury; He doesn't rage but instead sits in contemplation of eons.

This article looks like it has no description. You can write a bit about Oboroqoru, Ape God by editing it. Remove this template once a description is added.