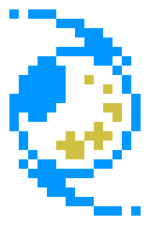 You gaze upon your own reflection in the lustrous chrome face of this conical orb, which emits a crackling drone and showers azure sparks upon the floor.

The sparking baetyl is the only type of Baetyl that gives the player randomly generated quests that give random rewards. These rewards can be a weapon, artifact, or even reputation points or attribute points. The player will know when a baetyl has an uncompleted quest if once the player character has already saw the baetyl at least once, they will begin to emit sparks occasionally. Even when the baetyl is out of the player character's vision, it will continue to emit sparks as long as it was seen once.

When spoken to, it will prompt the player to give them multiple random objects for a vague gift. The location of the baetyl and the items requested will be automatically noted in the journal. To fulfill this request, drop the requested objects in one of the 8 adjacent tiles to the baetyl, and then speak to the baetyl. It will ignore mods and will only take the number requested.

Once the request is fulfilled, it will stop emitting sparks and will respond only with "I AM SATED, MORTAL. BEGONE."

To be eligible to be used in a baetyl quest, the item:

Once these requirements are met, a random number between 3 to 8 inclusive of that object will be requested.

The type of reward is randomly generated out of 8 possible rewards, with each having an equal chance, unless the player character is a true kin, where the reward that grants mutation points grants attribute points instead. The tier of the reward is determined by a roll of 1d3+23-5 (Avg: 4). This means that the reward will be either tier 3, 4, or 5.