From Caves of Qud Wiki
Jump to: navigation, search
Stopsvalinn 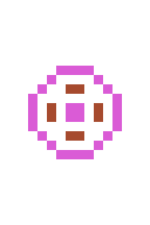 Rust stripes this ageless, flat-faced buckler. Painted on its face is the coat of arms of an archaic house -- white runic script on a field of crimson.

You may activate this item to conjure a force field in front of you. Robots will often be unable to advance toward you while the force field is active.

Stopsvalinn is a unique artifact that is always found on a legendary snapjaw. Finding the screen with the snapjaw will jot the location down in the player's journal under the Artifacts tab. It is the only buckler that does not lower DV.

This artifact also contains an energy cell slot that is consumed whenever Stopsvalinn is activated. Activation of Stopsvalinn creates a force wall of 3 square in front of the character in the desired main cardinal directions. When this shield is activated, enemy projectiles and enemies themselves will be unable to pass through, but players will be able to shoot through the field. The field will follow the player if the player moves, similar to a Force Bubble. Reactivating Stopsvalinn will cause the forcefield to deactivate.

[ From "The Peerage of Qud and Genealogy of the Noble Families" ]

Recounted here are the annals of the shield Stopsvalinn, heirloom of House Yish, from whose letters and diaries this account is composed.

• Borne by Harem, son of Oshum, and lost in the canyons near the farmstead of Qoppa when his covey was beset by snapjaws.

• Borne by Oshum, son of Qor, and wielded courageously at the Battle of YutYuyut.

• Borne by Qor, son of Ishram, and soused in the blood of a corrupt magister.

• Borne by Ishram, son of Iimet, when it languished in a house vault.

• Borne by Iimet, daughter of Harem, who supplanted her brother as heir when he was disavowed by their father.

• Borne by Harem, son of Morshur, who dashed upon it the heads of the beast Yygryla.

• Borne by Morshur, son of Oshum, who forded a river at the edge of the world.

• Borne by Oshum, son of Harem, and risen to rouse farmers to defend the Hold of Yish.

• Borne by Harem, who claimed descendancy from the Eater Yish, Warden of the Cross and Knight of the Most Noble Order of the Cone, who patrolled the rows of ancient Qud with his fellow Knights Conical, and on whose arm Stopsvalinn is told to have evoked such dread that riders drew their chariots to a halt at the mere vision of it.